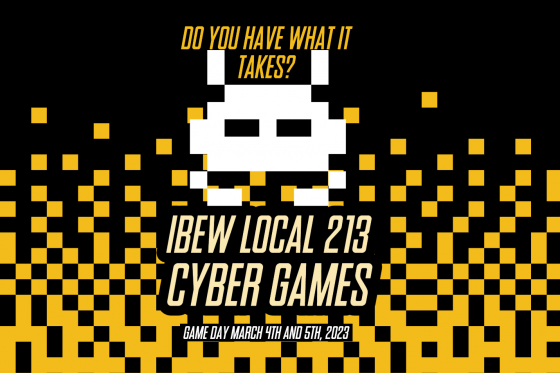 We are excited to announce that our goal of hosting the first-ever North America-wide IBEW 213 Cyber Games videogame tournament will become a reality in March 2023! Video games allow us to do what we love from the comfort of our own living room couches while still being engaged with our union!

What Game are We Playing?

Rocket League! We chose this because it is cross-platform, meaning you can play on, with and against anyone on Nintendo, PC, PlayStation 4/5, or Xbox One/Series X. Don’t have a copy of Rocket League? Don’t worry; it’s now a free-to-play game!

For more information about the game visit: rocketleague.com

How Many People Per Team?

Teams will play with three (3) players but can have up to five (5) on the roster. Don’t have three? Teams of two will do! Like to fly solo? That’s cool too! Register on your own, and we’ll match you up with other solo sisters or brothers.

First, figure out if you’re flying solo or coming in with a team. Either way, you’ll need a Team Name and a Team Captain. If you’re solo, the captain part is easy. If you’re a duo or trio, you’ll need to choose your Captain because they’ll be the one registering your team.

Captains, BEFORE YOU REGISTER, gather up for EACH PERSON on your team:

Registration closes at midnight on February 9, 2023. Don’t wait until the last minute; it’s first come, first serve, and we’ll be capping it at 32 teams. Our first year filled up early, so don’t wait!

When is the Tournament?

What players need to know:

For all teams that register, there will be a player meeting held the week before the tournament so we can all see the faces behind the screen. The tournament schedule will be posted once registration closes.

What are this year’s prizes?

Stay tuned! We haven’t finalized that yet, but if you scroll down you can get an idea of what they could be from last seasons prizes

What are the Rules?

Review and familiarize yourself with the rules and regulations for this event, including a code of conduct that will be enforced throughout the tournament. Claiming ignorance of the rules and code is not a viable defense.

Use this link: RULES & REGULATIONS

Want to volunteer instead of playing?

If people don’t want to play but want to help run it, contact us below, and we can get you involved in future tournaments.

Check our FAQs below or email us at nextgen@ibew213.org

Q - Battlefy won’t let me register as a free agent or a team of 2.

A - To register as a free agent, Battlefy still requires you to fill out all the form fields. If you’re a solo player or a team of two looking to partner up with others, please put N/A in all the fields that don’t apply to you.

2020 - Top Three Winners and Their Prizes 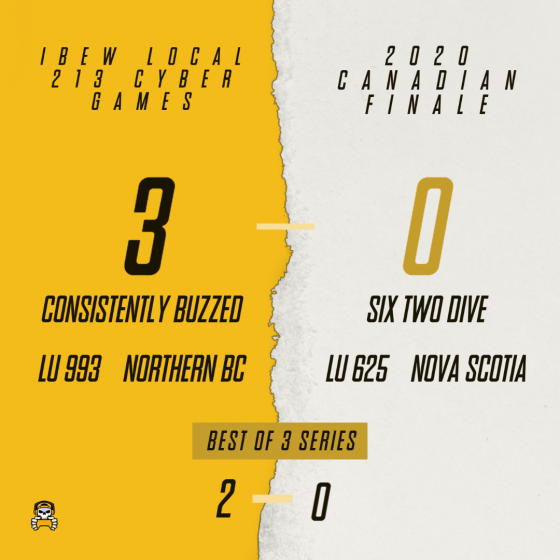 First Place
In the first place, with bragging rights as the champions of the 2020 IBEW 213 Cyber Games, is Consistently Buzzed from Local 993 (Northern BC & Yukon). They received individual Milwaukee M18 Drills!

Third Place
Rounding out the top three, solidarity team Say Watt, made up of Local 213 (Vancouver, Canada), and Local 105 (Hamilton, ON), who took home an IBEW swag pack.

Recent News
Bentall Memorial 2023
Join us on Friday, January 6, 2023 for the annual memorial honoring the Bentall Tower IV w
view
A Look Back at 2022, and Forward to the New Year
We starting 2022 still drying out from devastating floods in the Fraser Valley and IBEW 213 welc
view
Season's Greetings from IVP Russ Shewchuk
On behalf of the First District Office and our entire staff across the country, I would like to
view
Notice of Dues Increases January 1, 2023
At the 40th IBEW International Convention held this past spring in Chicago Illinois, delegates a
view
IBEW President Lonnie R. Stephenson Retires, International Secretary- Treasurer Kenneth W. Cooper Named New President
International Brotherhood of Electrical Workers President Lonnie R.
view