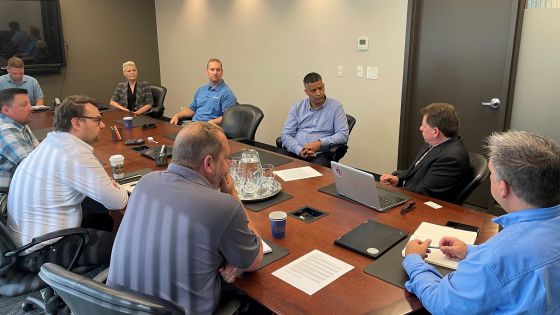 “Workers are struggling as they pay more for food and gas, and to keep a roof over their heads,” said Zarrillo. “In the midst of these struggles, we are seeing a growing recognition of the strength that unions can bring. Workers are looking for the protections that come with collective bargaining but five years after certification, these IBEW workers are still trying to get their first collective bargaining agreement. The Federal Labour Code is not working for workers.”

As part of the NDP’s Confidence and Supply Agreement, the Liberals must introduce legislation by the end of 2023 to prohibit the use of replacement “scab” workers, when a union employer in a federally regulated industry has locked out employees or is in a strike.

“These Telecoms workers are exactly who this legislation will help,” said Green. “The use of importing replacement workers completely undermines the democratic principles of having unions and collective bargaining. The Labour Minister’s mandate letter only specified this legislation change for workers locked out by their employer, but 85 per cent of federal work stoppages are strikes. Getting strikes included was a big win New Democrats secured for Canadian workers!”

New Democrats want to make sure that workers everywhere have the option to unionize if they choose without barriers or convoluted processes put in place by governments or union busting corporations. We’re also calling on the government to put measures in place to ensure that workers aren’t exposed to harassment, intimidation or firing by their employers for trying to organize.

“IBEW’s decision to strike came after 31 workers were laid off by Ledcor following a bad offer that we were advising against ratifying,” said Robin Nedila, Assistant Business Manager for Cable Communications Workers at IBEW 213.

These workers have been on the picket line since September 30, 2019.

“The NDP’s anti-scab legislation can’t come fast enough for our workers, some of whom have spent three years on the picket lines,” added Dustin Brecht, IBEW 213’s Lead Organizer.

Recent News
MPs Meet with IBEW 213 as Ledcor Strike Approaches Fourth Year
NDP MPs Bonita Zarrillo (Port Moody-Coquitlam) and Matthew Green (Hamilton Centre) met with IBEW
view
Congratulations to Glynis Jones on her Retirement
If you've spent any amount of time at the IBEW 213 office or joined us for one of our event
view
National Indigenous Peoples Day
In June, we celebrate National Indigenous History Month to honour the history, heritage and dive
view
64th Annual Ironworkers Bridge Memorial
Join Ironworkers Local 97 an in-person memorial this year to commemorate the workers who lost th
view
Sister Lupton Reflects on Convention
I feel fortunate to have been sent to Chicago as a delegate to the 40th IBEW International Conve
view