DISHONEST CONSTRUCTION CONTRACTORS who underreport income or deliberately misclassify their workers as independent to evade tax and employment fees are costing the B.C. economy at least $308 million a year. 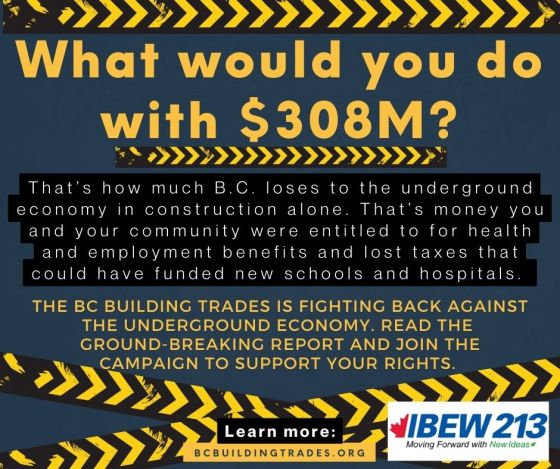 “Legitimate, responsible contractors and the wider taxpaying public have to make up the difference,” says Bourke. “Meanwhile the workers who are misclassified lose out on what they should be entitled to under the Employment Standards Act, such as overtime, holidays, sick leave and vacation pay.”

Bourke notes that $308 million could pay for the new patient care tower at Lions Gate Hospital, or buy 45 new MRI machines, or fund the entire Ministry of Mental Health and Addictions for almost eight years.

While the underground or “shadow” economy includes small-scale repair and renovation work that is unreported and paid for in cash, the bigger and more prevalent problem is the misclassification of workers. Unscrupulous contractors who misclassify workers as independent contractors enjoy an illegitimate savings on labour costs of about 20 per cent, which disadvantages the honest contractors who follow the rules.

“The misclassification of workers in B.C. is rampant and it has far-reaching consequences for every citizen of this province,” says Dan Jajic, business manager of the International Union of Painters and Allied Trades District Council 38 (IUPAT DC38).

IUPAT DC38 represents painters, glaziers, drywall finishers and wall and ceiling installers. It’s a sector that sees lots of underground economic activity, says Jajic, who hears horror stories from workers who used to be part of it.

“The effect on workers who are exploited through misclassification can be devastating: no workers compensation if injured, no Employment Insurance if laid off and no Canada Pension Plan on retirement. It’s just wrong.”

The magnitude of the problem cannot be underestimated.

The BC Building Trades, its member unions including IBEW 213, and contractors are calling on government to re-constitute joint compliance teams comprising officers from the Ministry of Labour, WorkSafeBC, the Employment Standards Branch and the Canada Revenue Agency to carry out spot checks and finally enforce our tax and employment regulations. These teams were disbanded 20 years ago amid cutbacks. Such teams have previously helped root out underground economic activity in the construction industry.

“This is not just a case of a handful of regular folks saving a few bucks on a long overdue bathroom renovation,” said Al Phillips, president of the BCBT. He notes that Statistics Canada calculates the underground economy overall as a multi-billion-dollar problem.

Ignoring the problem, as government has been, is no longer an option, adds Phillips.