Labour’s May Day (sometimes called International Workers’ Day) on the “First of May” has been held around the world for over 120 years. In many countries May 1 is a statutory holiday. Workers’ May Days celebrate international solidarity and the long history of labour battles and victories. (The “other” May Day also takes place in May and features May Queens, dancing around a tall pole and other such merriment.) 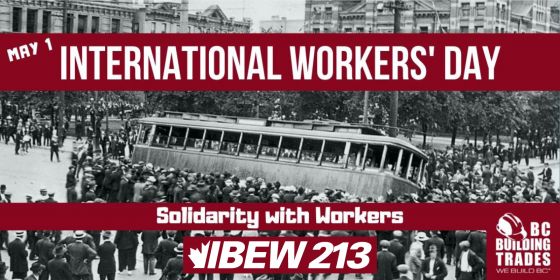 The first May Day took place in 1886 in Europe. Its original purpose was for workers in all countries to participate simultaneously to demand the eight-hour day; essentially a one-day general strike.

In 1894 the US government declared the first Monday in September “Labour Day”. They may have hoped to take the wind out of the sails of radicals, however, the dream of international solidarity on the First of May was slow to fade.

In British Columbia during the 1930s May Day parades and rallies drew thousands of people in large cities and in smaller towns. The most infamous parades took place in Vancouver during the Depression years with upwards of 15,000 citizens participating. Nanaimo and the East Kootenay coal towns of Michel and Natal also recorded instances.

“Not a hand was raised in violence, not a boo was heard”

The spectre of May Day rallies and parades stoked panic among state institutions. In 1932 the Navy brought a machine gun squadron to bolster City police forces and positioned a warship in Vancouver harbour in “what they considered adequate precautions”.

This excerpt from the BC Labour Heritage Centre. Continue reading on their website here: labourheritagecentre.ca/the-first-of-may

Recent News
International Workers' Day
Labour’s May Day (sometimes called International Workers’ Day
view
Day of Mourning 2021
As we approach the April 28 Day of Mourning, it is appropriate to reflect on the fact that many
view
Get Flushed!
There is nothing more important to us than your health, safety and well-being.
view
Offices Closed for Long Weekend
The IBEW 213 offices in Port Coquitlam will be closed for the Easter long weekend, from Good Fri
view
Annual Harley Draw now $20K Cash Draw!
It’s back and better than ever!
view